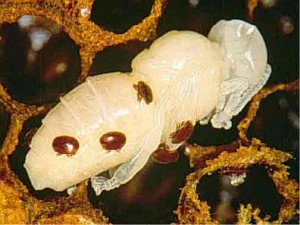 I was given this article last weekend (August 11 & 12, 2012) at a honeybee workshop hosted by Jacqueline Freeman and Michael Thiele.  It fundamentally challenges the perspective of raising and breeding resistant or hygienic bees.

“Honey bees of the Arnot Forest: a population of feral colonies persisting with Varroa destructor in the northeastern United States”; Thomas D. Seeley 2007

In short: horizontal parasite transmission happens when hives are placed right next to each other (i.e. a single apiary).  This favors especially virulent parasites, since bees from a dying hive drift with these varroa to the hive next to it.  When hives are not located adjacent to each other, there is less drift & less robbing.  The result is that the parasite (varroa) dies if it kills its host (the colony).  This means that single hives are at an advantage over hives in an apiary because they favor vertical parasite transmission (parent to daughter hive), and the varroa mites must adapt more quickly to the management style.

“To see if Arnot Forest bees can suppress the reproduction rate of mites, colonies of Arnot Forest bees and New World Carniolan bees were inoculated with mites from an apiary and the growth patterns of their mite populations were compared. No difference was found between the two colony types. Evidently, the stable bee-mite relationship in the Arnot Forest reflects adaptations for parasite (mite) avirulence, not host (bee) resistance.”  Seeley, 2007

For my part: I am going to work harder next year to spread my hives all around my neighborhood in singles instead of keeping them next to each other.

This entry was posted in Uncategorized. Bookmark the permalink.