Here is a fun sequence of photos from a swarm I collected in Bellevue, WA on Friday afternoon, May 11th. 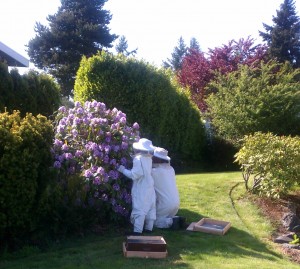 This was probably around 4 lbs of bees–a nice large swarm for May. I arrived about 45 minutes after Dave called. The swarm was close to the ground, but had a lot of twigs going through it. 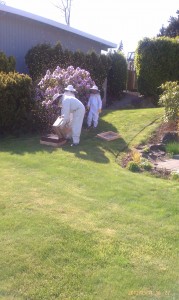 Because there was so little space in the bush, I decided to shake them into my cardboard box and quickly transfer them. 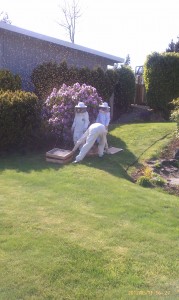 The air was boiling with bees. The cloud erupted into a swarm about 30 yards wide. But there was about a dozen that came out immediately and started “fanning”. The march of the airborne bees into the box is always facinating! 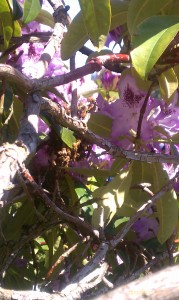 This fist sized cluster returned the next day

I usually like to follow a “leave no bee behind” policy, but today was a bit rushed, and I had to leave some scouts in the air. I drove away with a box full of bees about 45 minutes after I arrived. It was a very satisfying collection.

This entry was posted in swarms. Bookmark the permalink.