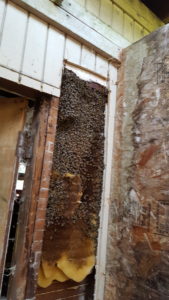 Reconcilliation:
10 hives in March
-2 hives died in summer from the overwintered stock
+8 swarms added (4 from my own bees, 4 from outside the apiary)
+4 splits made
+5 cut outs completed
+1 gift received
——
26 hives alive on September 1st, 2018 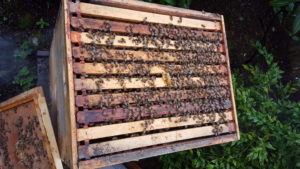 10 hives have made it into spring this year.  50.0% survival since last fall.

Sources of increase since March:

1 combination–1 new swarm did not present a queen, so I combined it with another swarm

Splits were made from swarm cells and not emergency queens.

7 hives have made it into spring this year.  36.8% survival since last fall. 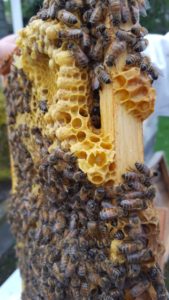 Reasons to become a beekeeper 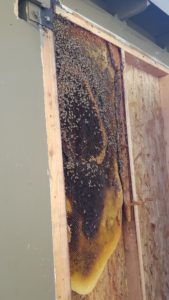 Other notes:
Of the swarms that were placed in my apiary, 3 of them were from known sources of overwintered treatment free colonies.
Splits were made from swarm cells and not emergency queens.

Thanks go to Jordan Hundelt, Sara Wolfe, Stephanie Wilkins, and Allie Pilot for making this documentary film about honey bees (featuring me)!

My answers to their interview question:

What are the individual jobs within the hive, and how do they work together to function as a super-organism?

Workers: Bring in & store food, feed young & each other, make wax comb from flakes secreted from their own bodies.  They are the ones that make the group decisions like building comb, raising drones, storing honey, or preparing to reproduce by swarming.
Drones; Body heat for the nursery, fly out during warmest part of the day to drone congregation areas to service virgin queens on their mating flights, There are thousands in a hive, but less than 1% actually mate.  Dies after mating.
Queens; Mother of all in a hive; lays her own body weight in eggs each day in the summer; Greatest servant of all in the hive.  She follows the direction of the workers.

How serious do you think the disappearance of bees has become?

No significant impact yet on monoculture agriculture, but it’s getting very close.  Almond pollination fees are now $250 per hive for 3 weeks of blossoms.  As commercially kept bees continue to die off, we will soon reach a point where commercial beekeepers will not be able to make up for dying hives.  I think there will soon be a point where there are not enough bees to do the work.  Beekeeper’s are very good at finding ways to keep their bees alive, but replacing their livestock has become the main focus in commercial apiaries.  They are getting more sophisticated each year in their approach..  It’s a good thing that bees are able to reproduce like insects.
There are people out there who are maintaining healthy, naturally kept bees.  I believe honey bees will not disappear, but I think that their role in modern agriculture will change.

Is there an organism that could replace honey bees in enabling certain foods to grow in abundance?

In part–Yes, nature is very complex and robust.  There are several other Eusocial and Solitary bees that are already being used on a small scale.  Bumble bees are raised to pollinate green house tomatoes during “off seasons”.  Mason bees are being used to pollinate spring-flowering tree fruit.  Leaf cutter bees are the pollinator of choice for alfalfa seed, and can be used for summer flowers crops too.  The challenge will be shifting to other options if honey bee pollination becomes scarce.  Food can continue to be grown in abundance, but the approach will need to change to diversified farms instead of fields of single crops.
Change brings opportunity, and for many reasons there is a huge opportunity for young farmers who are willing to do things differently.

Could you explain colony collapse disorder and what causes it? What does it mean for honey bee populations?

No one has been able to explain why.  There are some strange things that people do not understand about it.  In classic CCD, the bees fly away from a hive and leave the larvae in the nursery alone to die of cold, and a hive that dies from CCD does not attract robbing bees from other hives in the apiary who would otherwise jump on the “free honey” from the abandoned pantry of the dead hive.
Classic CCD has become less common, and has been replaced by bee hives that gradually die away over several weeks rather than in one afternoon.  The result is the same, but the behavior has changed.
I agree with most other beekeepers that there are a multitude of stressors that have caused this die off to happen.  Pesticides, Medications, swarm suppression, drone suppression, selective breeding, migratory beekeeping, build up of poisons in the comb’s wax, feeding artificial foods of soy protein and corn syrup, monoculture farming, loss of hedgerow weeds, movable-comb hives, and even the size of the bees themselves have all contributed to CCD.

What are the most effective actions people can take to protect bee populations? As individuals and as a society?

Awareness–say thank you to bees when you see them working on a flower.
Dollar voting–eat honey, burn beeswax candles to help contribute to a market for beekeepers.
Plant flowers–Blue flowers are usually the best match for bees.  Flowers that bloom in July/August are especially good because that is a time when there isn’t as much going on in our location.  Lynden trees are good because they flower after Maples are done, and before the blackberries begin.
Ask a beekeeper to put honey bees or mason bees in your backyard.  (I need a list of people interested in mason bees especially)
Raise mason bees in your own yard, so there are surplus bees to go to orchards for fruit pollination.
Become a beekeeper yourself.  It’s a fascinating and enjoyable hobby.

When and why did you start bee keeping?

I started in the spring of 2009 because we have a small farm and wanted to add honey bees into the mix.  Working with bees quickly turned into my most favorite thing in the world to do.

Could you explain how bees communicate?

Yes and No.
There is their “waggle dance” where people have correlated the direction and distance to their orientation and duration of the dances.  It’s really fun to see a swarm debate over potential homesites by watching their dancefloor.
They also communicate via pheremones.  There is the “lemon pledge” scent they use to call to each other to say “the queen is over here!  Come on in here!”.  And never eat a banana before working bees because the banana scent is their alarm pheremone and smells like a bee sting.  If you are stung by a bee, the stinger’s smell tells the other bees who to defend against.
Smoke shuts down their sense of teamwork, by masking their sense of smell.
There is much more to their communication and decision making than people understand too.  Bees can sense fear much like the neighborhood dog that only barks at someone who is afraid of him.  I don’t know how they can tell, but they do.
You can also tell a hive that has lost it’s queen or that is sick by the tone of the buzz inside.  The song of joy is very different from the song of grief if you know how to listen for it.
The longer I work with bees, the more I realize that I don’t understand them.
Posted in Uncategorized | Leave a comment 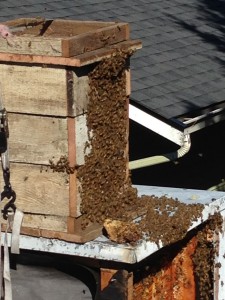 Moving from a chimney to a box

6 hives are under the Rausch family jurisdiction. (22% survival)

21 hives have died since Fall
(No fundamental beekeeper errors this winter–no starvation, no mouse issues, no moisture problems)

Sources for increase since September 2015:
1 cut-out performed in on September 12th–this one is one of the survivors!

2015/2016 observations:  Only 1 of the 21 hives that died was from an over-wintered queen, 20 were from first-year queens.  3 of the 6 survivors were from queens making their 2nd winter.  Most of my overwintered queens from 2014 “escaped” with swarms, and my one favorite died in the middle of her 4th summer.

Nathan’s conclusion: If a queen has the genetics to survive, she will live a long life.  Winters are not a problem for her.  Young queens often will not do as well as their mothers, and I have to assume that their mating partners are a big reason for that shortcoming.  There are a lot of drones out there that do not have “the right stuff” to generate successful progeny. 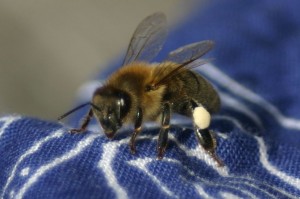 Reasons for decrease in 2015:
1 overwintered hive died in April
2 new swarms have died since spring
3 hives sold from 2015 swarms
5 swarms sold/gifted away
3 hives combined into others (2 splits + 1 swarm)

Other notes:
1 hive purged from my notes–it was never really mine
9 overwintered hives are still in my apiary
Of the swarms that were placed in my apiary, 10 of them were from known sources of overwintered treatment free colonies.  The rest were of unknown or unproven sources.

11 hives are under the Rausch family jurisdiction.  (65% survival) 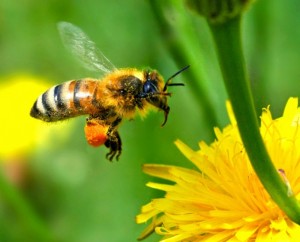 Sources for increase in during winter:
1 bee gum log received from a local homeowner in January 2015